You have that student. That “problem student” you always have to talk to. Or maybe you have 50 of them.

This is about one of mine. I had arranged to have a little 1-on-1 talk with him.

Devin (not his real name) was a constant problem in my intro to computers class. Constantly off-task, distracting his neighbors, ignoring my directions. My rapport with him might be described as cold, mayyybe neutral at best. One day I got pissed at my class for whatever reason (what, that never happens to you?) and as I was addressing them, the bell rang for the end of the period. I explicitly announced for them to stay seated even though the bell rang. I’m standing a few feet in front of the door and Devin nonchalantly gets out of his seat and heads for the door. Aw hellll no, I thought. I repeated to the class that they’re not dismissed yet and asked Devin to return to his seat. Of course, he walked right past me (I knew better than to try to physically block a student from exiting), he opened the door, and walked out.

A few days later Devin got in trouble with me for something else and I was able to have him agree to see me after school (that itself was another small ordeal).

That meeting actually ended up being a turning point for our relationship. Here’s what I did…

Most likely you’ve tried giving a student “a talk” — a “see me after class” conversation. I mean when you pull them aside/outside and have a private conversation, usually detached from the event when emotions aren’t charged anymore. You have enough time that you’re not rushed and you can hold a meaningful conversation.

So what does that conversation sound like? Whether it’s told gently or angrily, this is probably what most “see me after class” conversations sound like to the student: 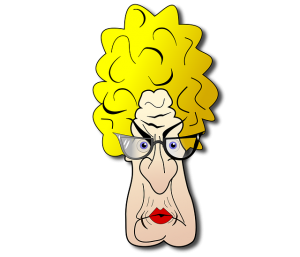 If this is all a student hears, what do you think he’ll do the next time he’s pulled aside for another talk?

He tunes you out.

Of course you don’t literally say those words (I think), but if you think about how most of these “conversations” go, what would you say is the purpose of the conversation? The student and most likely the teacher would say the purpose is to get the student to– well, stop being a problem. While this may be what we want – and legitimately so because the student is being a problem and should stop being a problem, a conversation like the above is pretty limited in which students it works with and it most likely has a negative effect on the relationship (even though sometimes it may yield compliance).

In the conversation, the bottom line is the student’s learning, safety, and success. The idea you want her to leave with is that “This is about you and your success – right now you are not achieving this thing you want to achieve and I want to make sure I do what I can to help you achieve that.” The idea you don’t want her to leave with is that you’re just trying to make your own life better or just trying to defend other students.

That’s all fine and dandy, but how do we actually do that?

Tactic 1: Start off the conversation on the right foot with these three elements

Your student likely expects to hear nag nag nag, so if you start off with anything like that, you risk getting tuned out before the conversation even starts. Instead, you open the conversation with appreciation and concern. No judgment.

Start the conversation with these three elements…

“Thanks for coming in to talk. I know you’d like to do well in this class and I’d like you to do well, too. I’m concerned… I noticed you haven’t been completing assignments and you’ve been doing poorly on quizzes, causing your grade to go down. Is there something I should know about or something I can do to help you do better in this class?”

Recognize – Show appreciation – doesn’t have to be for a major accomplishment: “Thanks for coming in to talk”. If possible, acknowledge any positive things the student is doing – improvement, effort, etc. If you reeeally can’t think of anything, at least presume something positive: “I know you’d like to do well in this class…”. Even if you’re not sure that’s true, instead saying something like “You don’t even care if you fail” won’t help the situation in any way.

Some teachers show concern and start off with “Is everything okay?” This is also a good start, but starting out cold with this question might be interpreted as “What’s your problem?” and the student thinks you’re expecting her to justify her behavior (remember, this is probably a student expecting the usual painful nag fest). I prefer to start the conversation on a positive tone as opposed to an ambiguous tone.

Describe – Give observations that are evidence the student is being negatively impacted: “I noticed you haven’t been completing assignments and you’ve been doing poorly on quizzes, causing your grade to go down.” You are NOT describing the student’s problem behaviors – you are describing the objective negative impacts of those behaviors as relates to the student’s success.

Support – “… I’d like you to do well, too. Is there something I should know about or something I can do to help you do better in this class?”

If the student actually opens up, you must be willing to listen.  What she says most likely won’t excuse her behavior, but we weren’t asking for excuses anyway. Your priority is to understand the student and make her feel understood. If you are asking the student to share her needs and she starts placing blame on you, it doesn’t help you convey concern for her if you seem more concerned about defending yourself. That doesn’t mean you need to agree with any accusations or comply with any requests, but at least acknowledge feelings and empathize. Do not get defensive. Your reaction here conveys to the student whether your interest is in her needs or in your own.

If the student chooses not to share or she claims everything’s fine, that’s okay. By asking, you’ve helped establish your intentions around the conversation.

Tactic 2: Relate every point back to the student’s success

For the remainder of the conversation (including the part where you tell the student what he should or shouldn’t be doing), as much as possible, connect your points to how they impact the student’s success. Bonus points if you can connect them back to concerns the student raised earlier in the conversation.

“The other thing I wanted to discuss was that when I’m walking around helping students, I often see you on websites not related to what we’re doing in class. It’s tough for me to help you and for you to work on the assignment when you’re not on the right website.”

Next, frame the problem in terms of impact on other students (this has a better chance of being effective if the target student has a good rapport with fellow students).

“I don’t know if you’ve noticed, but when you’re on those other websites, your neighbors get distracted and start looking at what you’re doing instead of working on their assignment. Then you guys start talking, which gets you distracted even more and it’s even harder for you to learn.”

Can you see how those last two statements were different from the typical teacher nag?: “Every time when I walk over to you, you’re off-task, messing around on some other website and talking to your neighbors. You gotta stop getting distracted and focus.”

Lastly, if you believe relevant, frame the problem in terms of impact on you (like before, the effectiveness of this is correlated with the student’s rapport with you). When describing the problem’s impact on you, try to wrap this back around to describe how that impacts the student (and/or the class as a whole).

“When I see you with your earbuds in, I get distracted and start getting frustrated, which interrupts the lesson for everyone [or] which makes it more difficult for you and other students to get help when I’m all flustered.”

(Can you see how that’s different from the teacher-centered vindictive version?: “When I see you with your earbuds in, I get pissed off, and when you piss me off, that’s bad news for you.”)

Almost anything can be brought back around to the student through his learning environment:

It’s like how when you were taught to write an essay, you were told to keep reconnecting your points back to the thesis statement. Same thing here, but the thesis is “Let’s get you to succeed”.

At the end of our conversation, Devin gave a relieved sigh, smiled, and lamented “Man, Mr. X [his other teacher – not his real name] never talks to me like this.” I didn’t want to throw a colleague under the bus so I just said something wishy washy about how different teachers have different styles.

After that day there was a noticeable difference in Devin’s behavior and demeanor. He was more focused in class, asked for help more freely, and always smiled and waved at me when he saw me in the hallways. He was even playful enough to joke around the next time I asked the students to stay in their seats – he pretended he was about to walk past me again and immediately cracked a grin and jumped back into his seat.

In terms of addressing Devin’s concerns, he said he just felt lost in the class sometimes and I suggested a couple things I could try to help. I don’t remember doing much more than just checking on him more frequently and giving him a bit more individual assistance when he needed it.

I doubt my actual accommodations played a major role in Devin’s improvement. Maybe he was used to being treated “as a problem” in most classes and it helped him to know I was willing to look beyond that and show concern about his learning and success instead of seeing him as just something that inhibits the learning and success of others. Maybe knowing his teacher went out of the way to make him feel understood goes a long way.

Watch out for these pitfalls

There’s of course no magical thing you can tell a student that will just get them to turn things around, so while this may not “work” (aka “fix the problem”) with every student in every situation, I know this has helped me de-escalate situations, reduce defensiveness, and strengthen relationships. My results with Devin are not typical, but that turning point also would not have happened if we hadn’t had that conversation.

More important than the exact tactics – which can be modified for your situations – is the overall philosophy of approaching a conversation with a student by framing the discussion in terms of their success. The point isn’t to be disingenuous and “trick” students into thinking you care, but oftentimes we do fixate on the problem a student causes for us (naturally) and keeping this technique in mind may help remind us to shift our focus back to the student’s needs.

Enter your email below and get access to exclusive goodies, as well as be notified of more posts like this! (About 1 email per month)

Talk to a “problem student” WITHOUT them tuning you out