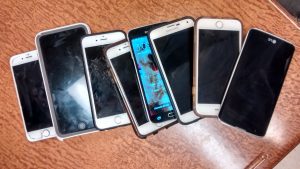 There’s a plethora of ways to limit your students’ use of cell phones, and sometimes it comes down to confiscation.

I have used this technique for over seven years for confiscating student cell phones with relatively high success rate and relatively low disruption to class. The heart of this technique is the “broken record” technique.

Before you change or start enforcing your phone policy, you should make clear to students your policy. This is what I announce to each period at the beginning of the year:

My cell phone policy is that you may not use your phone in class unless I give you permission. If I see you using your phone, I will ask for it. I will not give you any warnings. It doesn’t matter what you’re using it for, whether you’re checking the time or using it as a mirror. If I see it, I may ask for it, so your best bet is to just keep it out of sight. If I do collect your phone, I will keep it until the end of class.

If you are implementing this mid-year, you should give your students a heads-up (““Cell phones have been distracting, to you, and to me. From now on, if I see you using your cell phone for any reason, I will ask for it. I will not give any warnings. If I collect your phone, you will get it back at the end of class.”)

Your priority is that students exhibit the desired behavior because they understand the rationale and consequences. The spirit of this is not “gotcha!”.

My biggest fear in enforcing rules was if a student reacts in some extreme manner.

There are countless ways to respond to the situations addressed here. The system as presented is prioritized to be simple, straightforward, and require the least amount of distraction to you (especially for newer teachers or any teacher wrestling with classroom management).

This technique applies not just to confiscating cell phones, but many other basic actions we may ask of students, such as to change seats or take off their hat (but it’s not for asking students to stop doing something, like stop talking). In the end, it is about having control over your classroom atmosphere so that you can make it an environment you believe is conducive to student learning. Both teachers and students want the teacher to have control over the learning environment.

Have you tried this or something similar? What worked? What didn’t?
What other situations have you had success with using this technique?
What are things you might need to do differently to make it work for your situation?